“You see things; and you say, ‘Why?’ But I dream things that never were; and I say, “Why not?'” If I were saying that instead of George Bernard Shaw, it might go a little more like this: “I see things; and I say, ‘Why?’ Period.” But maybe, then, you were dreaming things like these curious, and in some ways beautiful,  literary fashions Flavorpill gathered up and saying, “Why not?”

On the other hand, when I see dream-like images by photographer Vikram Kushwah from his Memoirs of Lost Time collection, I don’t need to know why. The hauntingly beautiful collection just is. According to the description on Kushwah’s website, Memoirs of Lost Time is “an enthralling photographic and literary expedition. A biographical documentation of sorts, of seven creative personalities’ childhood recollections, this book captures not only what was, but also suggests a very imaginative take on what could have been.”

Few of us have not spent at least a brief moment dry in the mouth and completely without words in the days since Friday’s tragic shooting at Sandy Hook Elementary School in Newtown, CT. As Angela O’Donnell so wisely discerned in her reflection this week “Haiku: Pierced by Beauty, ”

It has been said that poetry is the un-sayable said. But this isn’t true. There are occasions in human experience when even poetry, the most potent form of language we humans have, cannot invent the words necessary to convey the unspeakable truth.

The Poetry Foundation re-ran their podcast “The Poetics of Mass Murder” this week, featuring poet Dan Beachy-Quick. The interview originally aired three years ago and weighed the role of poetry in coming to terms with these un-sayable things. The podcast features portions of John Berryman’s “The Dream Songs, ” which reflected on the 1966 shooting at the University of Texas, and Beachy-Quick’s poem “Chorus and Hero.”

Maybe you’re writing a book and you’d like to see it published someday. And maybe when it’s published, you’ll want to promote it so people will read it. And maybe you’ll hire a publicist to help you with that, since it’s a pretty daunting task. And maybe, your publicist will do a little homework about the best venues to promote your work before trying to pitch an interview with you, the author of a dating-after-40 handbook, to the editor in chief of Best American Poetry. You know, a prominent site about poetry, not “Internet dating gone wrong. Real wrong.”

As we gear up for the first Poetry at Work Day in offices, factories, retailers, and kitchens–wherever it is you go to work–we turn to the U.S. Government for a timely example of how to put poetry to work. As any respectable civil servant knows, there are rules and guidelines and advisories and best practices about when a government employee can and cannot accept gifts, and what types of gifts might be clear of scrutiny. But when the fruit basket arrives on the cubicle doorstep, which of those complicated rules apply?

The U.S. Office of Governmental Ethics revises and publishes a poem each holiday season to remind employees of their ethical obligations. (This year, for example, revisions were made to clarify the foreign-gift limit.)

The holiday season – a time for good cheer!
For egg nog, for parties, for friends to be near.
But I must be careful
Lest I accept free
A gift not permitted, no matter how wee.

Part two six three five of the 5 CFR
Explains in detail the relevant bar.
It defines the term gift
To mean all things worth money.
That’s NBA tickets or jars full of honey.

Read the rest of the official government poem, which knows nothing of haiku’s scarcity of words, at The Washington Post.

We’ve been talking a lot about haiku here this month, and some of our community have even lit up the Twitterverse with responses to our Monday morning poetry prompts. One element of haiku which stands out in each discussion we’ve had here this month is how its compact form forces the distillation of a powerful image. Unlike the government’s never-ending rules and regulations poem, with haiku, “There is no room for explanation, only impression, ” as Angela said.

The clever folks at Haiku Brew have developed an app for the iPhone that allows friends to distill these images together in a form of social haiku: take a picture, write a line, send it to a friend to write the next line, and send it to a third friend to write the last line. It’s a little like one of our Twitter poetry parties, with a very small guest list.

I’m pretty sure that when the Lumi folks created Inkodye, it wasn’t because they wanted to explore new tools to create new art, but really, that they wanted to work outside in the sun. Seriously, this stuff is cool. This liquid dye allows an artist to imprint on fabric using sunlight as the darkroom. The creator explains how her desire to get photography out of books and into people’s hands where they could touch it: “If everyone out there is using the same tools, then how different could the the work be?” The question for you? What different tools could you try to do your work and make it something new?

Memo to readers: It is my goal today to mention haiku 17 times. I’m only up to six, so please bear with me throughout the remainder of this post.

For many writers, the most difficult thing is starting. Despite what that Barkat woman says,  “just begin” is not that simple, even if one lies on the floor and stares at the ceiling or conjures images of Frankenstein. True stories, both. At last, the creators of Haiku Chain have found a way to help you start. In this fun little project, you can write a haiku (See how I did that? Mark me down for eight, please.) starting with the last line of the poem before you.

And how great is this? At only 17 syllables in all, the poem is 29 percent written for you already.

If you guess about this, you’re going to be right. I’m going to feature a haiku selection from our Every Day Poems daily. (Nine, thank you.) The reason for that is fairly simple. It’s a stunningly simple poem. You’ll also notice, if you count across the tips of your fingers like I do when I read haiku (ten), that this poem is not written in the well-known 5-7-5 structure. I learned something this week: that’s not a real haiku rule.

the ballet
of her arms
against the pillow

I won’t count this as a full thirteen haiku references (that one takes me to twelve), but John Siddique has a marvelous collection of as many poems that appear in shop windows in his community of Hebden, a contribution he has made to revitalizing the community’s spirit after a season of flooding. Siddique says,

I have a very strong sense of the poet (the artist) being as much a part of society as the post office, library, greengrocer, butcher, hardware store and the bookshop. …I felt that wanted to contribute to the town’s well-being and so I did what I do… Wrote…and amazingly the town gave me some of its windows so that passers by can be give pauses for thought as they go about their days. 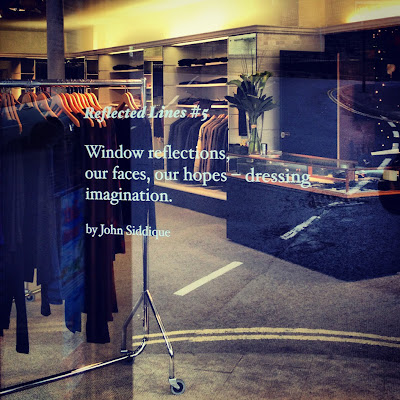 See poems from this collection of Reflected Lines: Haiku Trail for the Hebden Bridge at Siddique’s website.

One of the best parts of writing the Top Ten is browsing links that are sent to me by one of the other editors or contributors at Tweetspeak. Left to my own devices, I might write the entire article about one thing that happens to strike my fancy that day, like, oh, I don’t know. Maybe haiku. (With me? That’s fourteen.)

But my colleagues expose me to things I might not otherwise read, like this poignant account of the writer’s visit to a library housing various writings and artifacts of Sylvia Plath. The article by Emma Komlos-Hrobsky brings some humanity back to our view of a poet who, “like no other poet, has been idolized and appropriated and taken ownership of, cast and recast by acolytes as a ‘suicide doll.'”

Just about anyone with a website is pushing out year-end lists of the “Best [fill in the blank] of 2012.” Not to be outdone by any old anyone with a website, we even published our own lists of Our Favorite Books About Poetry and Our Favorite Poetry Books of the Year. But with all those lists floating around, it’s mighty hard to have time to read all the best books of the year. That’s why I loved this list of the best book covers of the year from BookPage. Much less reading, thank you. Sort of like, well, haiku.

(Are you counting on your fingertips? That’s fifteen.)

Not one to stop at just a list of great books, T.S. Poetry Press published the first title in its Creative Writers series: Inspired: 8 Ways to Write Poems You Can Love. This new book by L.L. Barkat is a simple, fun collection of enriching prompts that will inspire you to write poetry “you can love.” The book includes sections called: Catalog poems, What is Poetry, Why Poetry, Sonnets, Resolutions, Sestinas, Villanelles, and By Heart. You’ll notice haiku is conspicuously absent from the section titles.

Fans of Kafka will appreciate this Japanese animation of A Country Doctor recently featured at Melville House. The animation is exquisite.

Oh, and in case you were wondering. I did intentionally refrain from making the easy haiku reference in relation to the animation. You know, being Japanese and all.

From of all of us at Tweetspeak Poetry, T.S. Poetry Press, WordCandy and Every Day Poems, we wish you a very happy holiday, however you choose to spend it.

Buy a year of Every Day Poems, just $5.99— Read a poem a day, become a better writer. In December we’re exploring the theme Haiku.