Daddy sang age-old ballads, country tunes, folk songs, and recited Edgar Allan Poe. A traveler with an adventurous spirit, he regaled me with long stories of swimming in lakes, rivers, and oceans, or of indigenous people in faraway lands who welcomed him into their lives and homes. He’d been disoriented but never lost in the Darien Jungle. And he once woke up perched on a cliff after crashing his car into a tree.

His stories of the Second World War were among my favorites. Every day he volunteered to plow minefields with a half-track. Until he saw a crater as large as the moon and decided to cut his odds and share that duty with other soldiers who called him “Wilkie.” When bombs lit up the night’s sky, he’d sneak from camp and into the arms of a French girl in a nearby village.

Busted back to private, he seemed to always get caught. Which never stopped him, only inspired clever new ways to escape. He once ordered a man off his bicycle to find that French gal and return to his guarded tent at sunrise. Busted again.

He earned back a stripe when caught in crossfire. He and three buddies ducked behind a jeep. The ping of bullets, the smell of hot metal. He told them to wait for an enemy reload, then dash to a nearby safe building, one at a time. Noise, silence, then “Run!” my father shouted. Daddy sprinted last and felt the heat of a bullet whizz past his left ear.

He always ended that one by saying, “But then I met another gal in another village and got busted back to private again.”

Those stories were usually told while he drove. With Daddy, my sisters and I were always traveling and singing songs. We would listen to his soft, melodious voice spill dozens of poems but mostly “The Raven” and “Annabel Lee.” As a child, I once asked when he had met Mr. Poe, and he just said, “During and after the war.”

Hard to believe it was cancer that killed him at seventy-one. The last two years of his life he had to stay put, though he did take up skydiving. Only four hours away, my sister Jeanne and I visited often to dance with him and drink memories of song lyrics, stories, and poems. I asked numerous questions, even recorded a few of his tales. Yet I never thought to ask my word-loving father:

What compelled you,
Kentucky-born son
of a dandy, failed farmer,
to memorize Poe’s “The Raven” and “Annabel Lee”?

Visit the Poe Arts & Experience library and try memorizing Poe if you’d like a little challenge (and something to recite as you travel the road.
___________

Buy a year of Every Day Poems, just $5.99— Read a poem a day, become a better poet. In June we’ll be exploring the theme Trees. 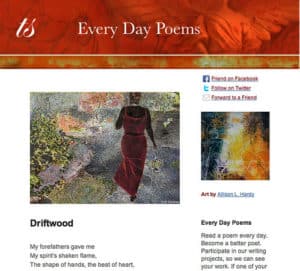