There Will Come Soft Rains

There will come soft rains and the smell of the ground,
And swallows circling with their shimmering sound;

And frogs in the pools singing at night,
And wild-plum trees in tremulous white;

Robins will wear their feathery fire
Whistling their whims on a low fence-wire;

And not one will know of the war, not one
Will care at last when it is done.

Not one would mind, neither bird nor tree,
If mankind perished utterly;

And Spring herself, when she woke at dawn,
Would scarcely know that we were gone.

Watch “There Will Come Soft Rains” Video, story by Ray Bradbury Based on Poem

There Will Come Soft Rains from Peter Cotter on Vimeo.

Listen to a Musical Interpretation

Feel free to use this graphic on your own website. All we ask is that you link back if you do. Thank you! 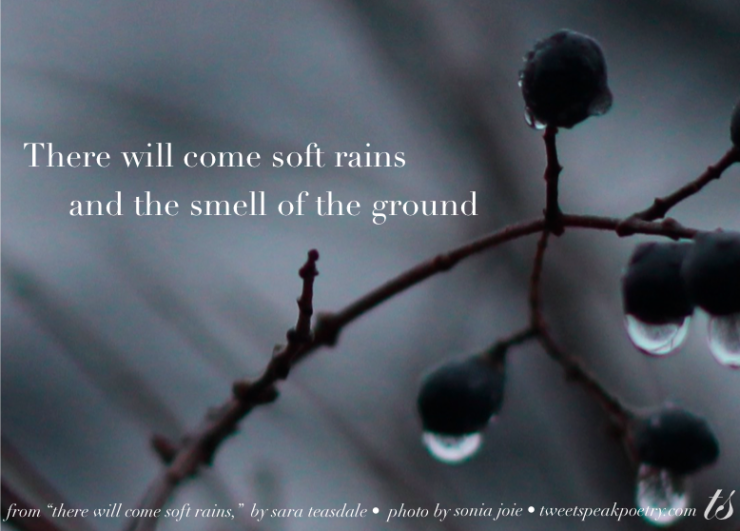 If you enjoyed the poem There Will Come Soft Rains, you might like her book, Flame & Shadow… Sara Teasdale was a lyrical poet born in 1884. She was known for simple verse focused on love, beauty, death, and loss. Oh, and lots and lots of kissing.

Though she was in love with fellow poet Vachel Lindsay, she married Ernst Filsinger. She and Lindsay remained longtime friends.

Her third poetry collection, Love Songs, won the Columbia Poetry Prize (which later became the Pulitzer Prize for Poetry) in 1918. Other prominent works include Flame and Shadow, and Strange victory, which was published after her death. Teasdale suffered poor health most of her life. She died by suicide in 1933.