Robin Hood (To a Friend)

No! those days are gone away
And their hours are old and gray,
And their minutes buried all
Under the down-trodden pall
Of the leaves of many years:
Many times have winter’s shears,
Frozen North, and chilling East,
Sounded tempests to the feast
Of the forest’s whispering fleeces,
Since men knew nor rent nor leases.

No, the bugle sounds no more,
And the twanging bow no more;
Silent is the ivory shrill
Past the heath and up the hill;
There is no mid-forest laugh,
Where lone Echo gives the half
To some wight, amaz’d to hear
Jesting, deep in forest drear.

On the fairest time of June
You may go, with sun or moon,
Or the seven stars to light you,
Or the polar ray to right you;
But you never may behold
Little John, or Robin bold;
Never one, of all the clan,
Thrumming on an empty can
Some old hunting ditty, while
He doth his green way beguile
To fair hostess Merriment,
Down beside the pasture Trent;
For he left the merry tale
Messenger for spicy ale.

Gone, the merry morris din;
Gone, the song of Gamelyn;
Gone, the tough-belted outlaw
Idling in the “grenè shawe”;
All are gone away and past!
And if Robin should be cast
Sudden from his turfed grave,
And if Marian should have
Once again her forest days,
She would weep, and he would craze:
He would swear, for all his oaks,
Fall’n beneath the dockyard strokes,
Have rotted on the briny seas;
She would weep that her wild bees
Sang not to her—strange! that honey
Can’t be got without hard money! 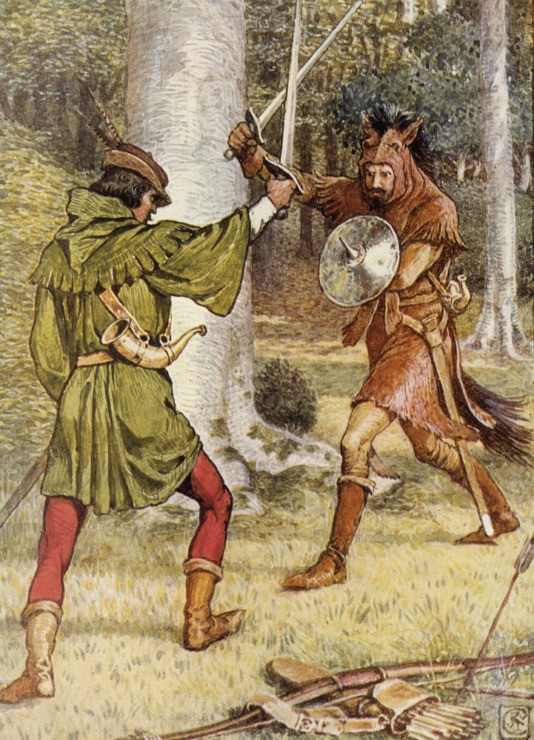 Robin Hood and Guy of Gisborne fighting by Walter Crane, 1912. Enjoyed Robin Hood (To a Friend) by John Keats and want to know more about Keats’ life? Try A Month With Keats: A Walk Into His Life

That’s it for Robin Hood (To a Friend)!