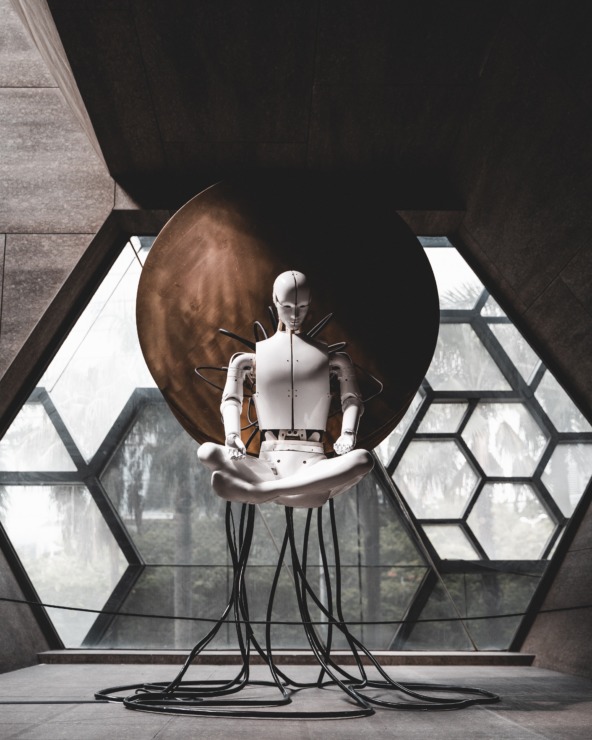 Photo by Yuyeung Lau on Unsplash

In Philip K. Dick’s Do Androids Dream of Electric Sheep the most crucially motivating factor of everyone, human and android, is the wish to not be alone, and all the systems they set up, and even the us-vs-them of humans and androids, and the idea of empathy vs. non-empathy in particular, is all created to hide from the horrible loneliness of existence. In fact, the empathy that is made so much of throughout the book is not empathy at all, but the positive state of self-focused fellow-feeling. True empathy, as a transcendental, selfless state, is shown to be rare, sublime, almost unattainable and essentially non-pleasant.

The war that had happened before this story starts ended with a nuclear fallout. Animals and people died, and most people who could manage it emigrated to Mars afterward. The book opens with Rick Deckard and his wife Iran, both living on earth, having an argument about what mood to dial on their mood organs (technology that allows people to create artificial feelings for themselves). Iran says she’s scheduled a depression for herself, and Rick can’t understand why anyone would do that. Iran tells him why she had done so. One day, having turned off the TV, she heard the empty apartments. Iran says “…I realized how unhealthy it was, sensing the absence of life, not just in this building but everywhere, and not reacting … that used to be considered a sign of mental illness, they called it ‘absence of appropriate affect.’ So I left the TV sound off and I sat down at my mood organ and experimented. And I finally found a setting for despair.” [5] This sentence encapsulates one of the themes of the book, which involves the way people, in ordinary life, go through existence without feeling empathy toward everyone else in the world or recognizing the constant tragedy present in life.

The disconnect between Rick Deckard and Iran is set up as the bookends of the novel, and serve as a microcosmic example of this self-focusedness. They are married, presumably, in order to share their lives, and yet they hardly seem able to understand or impact each other at all. Later in the book, in the android police station, Deckard uses his one phone call to try to call his wife, and instead gets a random woman he doesn’t know. Plot-wise, it’s a set-up: thematically, it is another example of the isolation of existence. The fact that the android police station could exist so well, hiding right under the nose of the ordinary police, brings that even more to the fore.

Empathy is an important idea in the novel, as it is the crucial measurement of the difference between androids and humans, and is the basis from which the society justifies their treatment of androids as inferior. The lack of empathy is seen as the lack of the crucial element of what makes humans, human. The book deconstructs this paradigm not through the idea of empathic androids, but through the reverse phenomena—having empathy, even in humans, is not a stable trait. Humans can and consistently do lack empathy, the very thing they revile the androids for.

Examples of the androids’ lack of empathy abound: in a key scene late in the novel, Isidore (the secondary protagonist) finds a spider in his house. He keeps it safe and shows it to the androids, who proceed to “experiment” on it, cutting of its legs to see if it can still walk with four. This, plus the late twist scene with Rachel Rosen, where the reader learns that she had been faking her motives to gain Deckard’s sympathy the whole time, make it clear that the androids do not have empathy, whatever doubts the readers may have had through the course of the novel. The androids are observably “off” in some way to close observers (Isidore) unless they disguise that with an explainable reason: being schizophrenic, or being from another country and unfamiliar with the usage of some words, as Luba managed to expertly do. What remains, however, is the fact that many humans have consistently behaved similarly. Rachel Rosen, for example, is inextricably connected to the Rosen corporation, which creates androids without caring about the sentience of the beings they create when thinking about how they can be treated afterward.

The situation with the bounty hunter Phil Resch shows the crossover of human and android quite perfectly. He behaves in a manner similar to androids, even seemingly fooling Luba Luft. When he tells Luba “[The android police station] even feel[s] confident enough to hire a human bounty hunter,” she answers, “You? …You’re not human. No more than I am: you’re an android, too.” [132] And he, himself, after being framed by Garland, starts to wonder if he is in fact an android. In a very interesting scene in the art museum, Resch looks at the picture of The Scream and muses that must be what it is like to be an android. Even though he does so trying to prove to himself that he can’t be an android, the scene is striking, in itself and for the departure from how he behaves toward the idea of androids for the rest of the book. The description of the painting is as follows: “[an] oppressed creature … hands clasped in horror to its ears, its mouth open in a vast, soundless scream. Twisted ripples of the creature’s torment … flooded out into the air … [it] had become contained by its own howl. … the creature stood on a bridge and no one else was present; the creature screamed in isolation. Cut off by—or despite—its own outcry.” [130] “I think,” Phil Resch says, “that this is how an android must feel.” [130] Whether Resch is correct about this or not, he is, in this moment, imagining himself into the shoes of an android. This is how they must feel. The painting is, in fact, a painting of feeling more than a painting of anything else. And it’s an existence of horror and loneliness. Resch will turn out to be right in the end: both humans and androids share the capacity for recognizing the loneliness of existence.

In fact the empathy talked about up till now is not empathy at all, but self-focused fellow-feeling. Fellow-feeling is not empathy. It is, perhaps, the idea of likeness-to-others, at base a feeling of the wish to no longer be alone. And it is shared by both humans and androids. “You think I’m suffering because I’m lonely. Hell, all Mars is lonely. Much worse than this,” Pris says. “I understood that the androids helped,” Isidore says. “The androids,” Pris says (referring to herself and her friends), “are lonely, too.” [150]

The androids who have come to earth are friends, and there are scenes where Pris and the others show a wish to have the company of their friends. The humans’ desire for companionship is shown quite concretely in the examples of the real animals.

In the world of Do Androids Dream of Electric Sheep, all of existence is a sharing of loneliness. This is, in fact, shown through the idea of Mercer, and his constant climb up the hill, shared among other humans. But most humans use the empathy box in a self-focused way, to be assured of others’ existence and be connected to them. Pure empathy, as a selfless active state, is not seen, even in humans, until the very end of the novel.
That empathy is a real experience is shown through the protagonist Rick Deckard, who finds himself coming to empathize with the plight of the androids. (At the end of the book, the crucial human symbol of empathy, caring for an animal, changes from biological or human to android-esque with the mysterious toad that was electric.) “In every cinder of the universe,” Deckard thinks, “Mercer probably perceives inconspicuous life. Now I know… and once having seen through Mercer’s eyes, I probably will never stop.” [238]

Deckard came to feel empathy by the end of the book, in his own trek through the desert and up the hill, but this is shown as a state paralleling despair, unattainable for most people, most of the time. “the pain [of the rocks hitting him], the first knowledge of absolute isolation and suffering, touched him… in its undisguised actual form. … without it meaning anything.” [231] This experience of transcendental empathy is not the positive feeling the humans in the book mean when they refer to empathy, it is not self-focused fellow-feeling. Like in the picture of the Scream, it is something more awful. In truly feeling empathy, Decker came up against the fact that there was constant violence in the world of beings against other beings, and that he, and everyone else, was part of that; his own pain was just as arbitrary as everyone else’s.

And this moment of sublime empathy with others, in connection with Mercer, this true experience of the world as it is “in its undisguised actual form,” is experienced by Deckard as a state of utter aloneness.

If you enjoyed this article about empathy in Do Androids Dream of Electric Sheep, you might also enjoy Strange and Wonderful Worlds: How I Discovered Science Fiction by Glynn Young.

If you liked reading about empathy in Do Androids Dream of Electric Sheep, you might also enjoy these science fiction writing prompts!