Ah! ken ye what I met the day
Out oure the Mountains
A coming down by craggies grey
An mossie fountains —
A[h] goud hair’d Marie yeve I pray
Ane minute’s guessing —
For that I met upon the way
Is past expressing.
As I stood where a rocky brig
A torrent crosses
I spied upon a misty rig
A troup o’ Horses —
And as they trotted down the glen
I sped to meet them
To see if I might know the Men
To stop and greet them.
First Willie on his sleek mare came
At canting gallop —
His long hair rustled like a flame
On board a shallop.
Then came his brother Rab and then
Young Peggy’s Mither
And Peggy too — adown the glen
They went togither —
I saw her wrappit in her hood
Fra wind and raining —
Her cheek was flush wi’ timid blood
‘Twixt growth and waning —
She turn’d her dazed head full oft
For there her Brithers
Came riding with her Bridegroom soft
And mony ithers.
Young Tam came up an’ eyed me quick
With reddened cheek —
Braw Tam was daffed like a chick —
He coud na speak —
Ah Marie they are all gane hame
Through blustering weather
An’ every heart is full on flame
Ah! Marie they are all gone hame
Fra happy wedding,
Whilst I — Ah is it not a shame?
Sad tears am shedding.

Enjoy Artistic Representations of “A Galloway Song” by John Keats 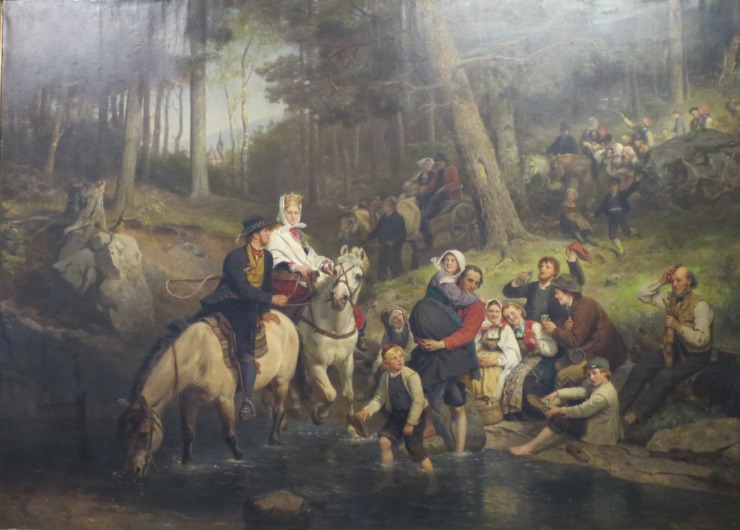 Wedding Procession through the Forest by Adolph Tidemand, 1873

Listen to this Reading of “A Galloway Song”

Listen to Musical Interpretations of “A Galloway Song” by John Keats

Enjoyed A Galloway Song by John Keats and want to know more about Keats’ life? Try A Month With Keats: A Walk Into His Life

That’s it for A Galloway Song!